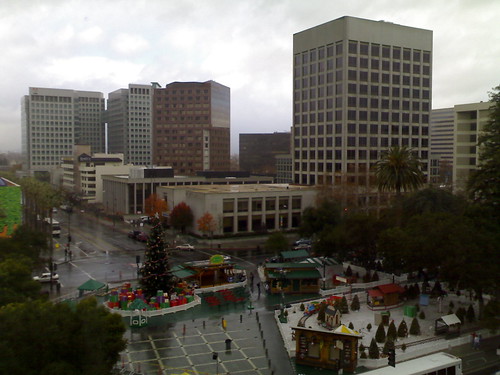 It’s Christmas time in San Jose and i’ve just arrived to a cold and bleak day. What a huge contrast from Sydney where it is hot (although Sydney has had a few cold snaps lately).

The flight this time was tedious, i dont think i slept for more than 20 minutes and after the initial excitement of the new Qantas “On Demand” system being able to pass the time, i was dissapointed 20 minutes into “Little Miss Sunshine” that the system had overloaded due to excess use. Hello? Qantas? Did you not count the seats in the plane when designing the system? For the remainder of the flight i had to watch movies the old way.. flick through the channels and hope not to miss the beginning.

This flight’s movies: Little Miss Sunshine (Great), Devil Wears Prada (Plane movie, otherwise dont bother) & My Super Ex Girlfriend (safe to avoid at all costs unless you were as bored as i was)